University of Zurich operates a dental school in Zurich Switzerland

Dr. Albert Mehl is a professor and the University of Zurich Center of Dental Medicine

Dr. A. Ender is faculty at Center of Dental Medicine at University of Zurich

CAD-Ray Distribution LLC, a California corporation, distributes dental intra and extra-oral imaging devices, software, milling machines, and CT 3D X-rays machines. It is independent of Medit Company located in South Korea. Medit is a manufacturer of Intra-Oral and Extra-Oral Scanners. CAD-Ray does not represent any views of positions held by Medit

Primescan was submitted for trademark registration on June 26, 2018 (Figure 1) in Europe

We allege that Albert Mehl and the co-authors procured at least one competing Intra-oral scanner under false, mysterious, and misleading pretenses, concealing the true purpose of their testing. A device distributed by CAD-Ray in the United States was provided to the University of Zurich through an intermediary German distributor, that documented the camera in Albert’s Mehl’s possession, along with action shots of the camera being used in his own mouth, dated July 6, 2018 (Figure 2 and 3).

In early February of 2019, the authors presented their findings to the sales force of Dentsply Sirona and their own Key Opinion Leaders (KOL), who were summoned to Atlanta, Georgia to prepare for the imminent release of a new intra-oral camera by Dentsply, named the Primescan. The results of the study were yet to be published in the journal, but social media was set ablaze with many declaring it the most accurate camera on the market (Figure 4). There are conflicting reports if any of these study’s materials and methods were ever divulged to the multiple manufacturers. The authors’ disclaimer states that no conflicts of interest existed between their contribution and the conclusion of the study. However, a google query reveals multiple patents assigned by Albert Mehl to Dentsply Sirona. We assume these were not donations to the publicly traded company and all parties involved gained significant financial rewards from these endeavors and continue to do so. (Figures 6,7,8)

To compound the problem for the authors, the university and Dentsply Sirona, Dr. Mehl served as the co-author of the article, and was the editor in chief for the publication, titled “The Journal of Computerized Dentistry.”

At a recent visit to the publication’s convention booth at the IDS 2019, their agents readily demonstrated the article, and the very next page, after the article’s references / acknowledgements, a full page ad for the Dentsply Sirona Primescan was displayed (Figure 9). Even the rates to publish a full page advertisement were disclosed (Figure 10).

It is readily apparent to us at CAD-Ray.com that every effort was made to time the release of this study for the dramatic launch of the PrimeScan by Dentsply Sirona and the disclaimers by the authors are riddled with inaccurate, misleading, and false statements. We are of the opinion that the study was not conducted in good faith and that it is was used as a marketing piece to dazzle the dental community with the Primescan launch. We are pursing all the avenues available to us to remedy the situation

This press release serves as a notice to all key opinion leaders, paid speakers for Dentsply Sirona, and any of its agents, whether employed by X-ray or any of its distributors to stop referencing this article and its findings as they will be held personally liable for disseminating these Ill gained study results. Everyone that is found referencing this article is subject to liability

We demand an immediate retraction of any advertisement and promotional material from Dentsply Sirona that is related to this study. We also demand that X-Ray notify all of it KOL’s to stop disseminating this information, along with a public apology for utilizing the article for marketing purposes. We also demand that the University of Zurich retain all documented correspondence between its faculty and members of X-Ray and to prevent the authors from destroying the data collected in the study, including those of the Control Group and the ones captured from all the devices uses. We have good cause to show the data captured does not reflect the materials and methods of the study.

Any members of the dental community who witness any references to this article in any continuing education program, online, or any other medium are free to post links, images, screenshots anonymously below

These images demonstrate how Dr. Mehl presented his study’s findings on Feb 4, 2019 to Dentsply Sirona Key Opinion Leaders.  His article was published a month later.

Science does not work in this way!  As a researcher, you do not divulge your study’s results to a publicly traded company before other academicians have a chance to challenge, repeat, or verify the integrity of your findings.  The only thing more egregious than this act is to deny any conflicts of interest in the disclaimer section of your study Dr Albert Mehl is the co-author of the study

He is also the chief editor of the Journal of Computerized Dentistry, published by Quintesseence.

The journal is the official publication of the International Society of Computerized Dentistry, a for profit venture devoted to CEREC training.

This was not disclosed in the disclaimer of the publication Promotional Video by the University of Zurich

The authors of the study declare that there are no conflicts of interest, but a promotional video by the University of Zurich School of Dental Medicine proudly displays lots of Dentsply Sirona equipment. The university does not declare if it paid for all this equipment or if it was donated.

Dr. Albert Mehl is the developer of the biogeneric restoration algorithm and his work is readily used as promotional material on the Dentsply Sirona website

Ever wonder how Denstply has so much access to the study’s content when no other manufacturer is afforded the same courtesy? 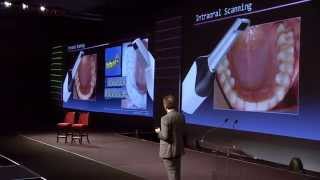