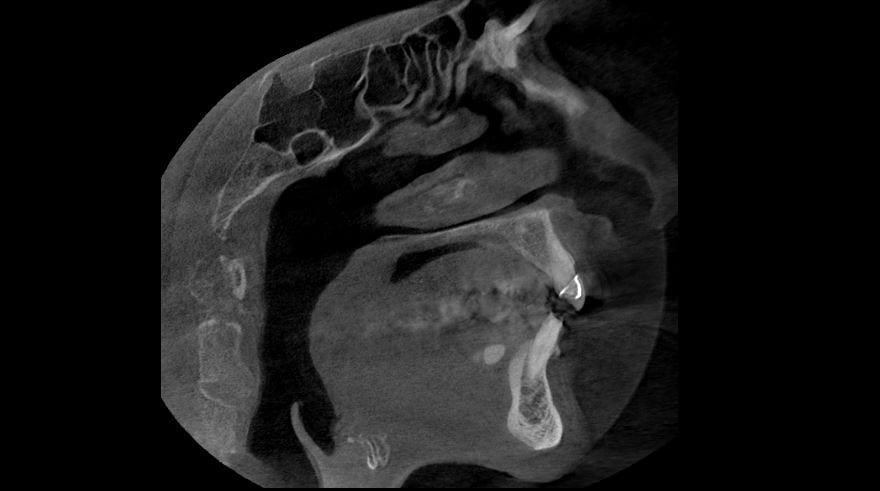 There are multiple reasons to invest in CBCT technology for dentistry.  The current top 3 reasons are for diagnosis, implantology, and sleep apnea.

This article will demystify the purchase decision making process and help you with implementation of the technology. It will remain neutral with regards to the machine and manufacturer type and will highlight / define the clinical relevance for each topic.  Having the vision for future practice growth will also play a large part in what type of machine you will purchase.

Generally the field of view determines the cost of the machine.  There are very valid arguments on either side: restrict the area imaged for very specific clinic needs vs. capturing as much information from both jaws, the condyles, the nasal passages and at least the complete outline of the maxillary sinus as part of your comprehensive exam. Each clinician must decide whether the added exposure to the radiation is worth the risk.

Small fields of view machines essentially eliminate the capability to do guided surgery.  The trend over the last 5 years as been to not only assess the bone volume with CT scans but to also utilize the data to derive a three dimensional plan that can be used to fabricate a surgical stent to deliver a fixture in the exact same position of the three dimensional design.

With a limited field of view that shows one or two teeth to the targeted area, you essential opt out of the capability of performing this type of procedure for a variety of reasons. Although one can manipulate multiple images and create a larger model to work with utilizing specific software, it is not worth the effort. To keep it simple, if you plan on placing implants, the field of view should contain the complete image of the Maxilla and the Mandible.  You can choose a machine that does not capture the condyles, but ideally, the field should allow you to capture the third molars with each image taken, as this can become part of your regular examination.

Oftentimes with smaller machines, parts of the root tips of the wisdom teeth are “cone cut”, so you have to re-position the patient and scan them again to visualize the data you are scanning for, exposing them to more radiation unnecessarily.  The next level for the field of view that you should consider should capture the condyles and all of the maxillary sinus.

The position of the condyle and a radiologist’s report can be great documentation for large restorative cases.  Generally, most doctors submit for a pathology report to make sure there is no disease process and then submit another scan after the new vertical dimension is established to catalog the change in condylar position.  The sinus and its relationship with posterior maxillary teeth will likely be the most surprising aspect of CBCT for most dentists, as perforations through the path of least resistance, the floor if the sinus, are not ever visible with peri-apicals.

Furthermore, the vast majority of sinus issues that remain unresolved AFTER intervention by ENT’s are odonotogenic in origin.  A large field view will allow you to see the maxillary sinus in its entirety, depicting the drainage and patency of the ostium.

Another important element to consider is artifact and scatter.  All cone beam machines produce artifact around opaque materials as see in the image to the right.  This effect is very important to control in implant planning.  There are numerous workarounds that include incorporating more dentition in the equation that are not heavily restored with radio-opaque material.  As a last resort, one can use a scan appliance to overcome the inaccuracies introduced by this artifact.

Patient information regarding the presence of sleep disordered breathing (apnea), begins with thorough clinical evaluation. The patient/parent should be interviewed regarding snoring, mouth breathing, medications, and visits to the ENT. An important initial area of assessment includes facial profile (as Class II dolicofacial profiles tend to have more airway problems than other facial types). Resting lip posture, droopy eyes, and the presence of “shiners” (vascular congestion manifested as darkness under the eyes) should be noted. Intraoral findings, such as high palatal vault, narrowed transverse dimensions of the maxillary and/or mandibular dentition, anterior or posterior crossbites with associated functional shifts can be related to airway irregularities.

Once the above questions and clinical assessment are performed, and the findings suggest presence of breathing disorder, imaging is useful to identify possible anatomic and morphologic structures that contribute to risk for presence or development of obstructive sleep-disordered breathing. While sleep apnea is not diagnosed with imaging, cone beam computed tomography (CBCT) exams are valuable in providing three-dimensional or multiplanar views that enable clear definition of irregularities that may be creating obstruction or resistance to airflow through the nasal passages, the nasopharynx, the oropharynx, and the hypopharynx. Some of these irregularities include soft-tissue enlargements or aberrant morphology, bony structures, dental findings, cephalometric measurements, and pathology. Examples in these categories are depicted in images below.

Airflow into the patient’s airway begins at the external, then the internal, nasal valves. These entrances are composed of cartilage, muscle, ligaments, and mucosal soft-tissue, all of which can display irregularities of various etiologies, creating narrowing or blockages. The image above depicts narrowed left internal nasal valve, and constricted right internal nasal valve.

Deviation of the nasal septum is a frequent finding. A large range of variability is seen. Some examples include minor deviation of the full septum, deviation of a small segment, enlarged septal tubercle, formation of a septal spur, and S-shaped contour that deviates both to the right and the left at different levels of the septum. The image above shows right deviation near the level of the right middle meatus, with a bulbous morphology of the septal tubercle contacting the right inferior concha. This can introduce alteration to airflow pattern through the nasal passage.